Found this one on my desktop tonight, and thought I'd share it with you. 3 clues give away the age of the screenie. Any guesses? 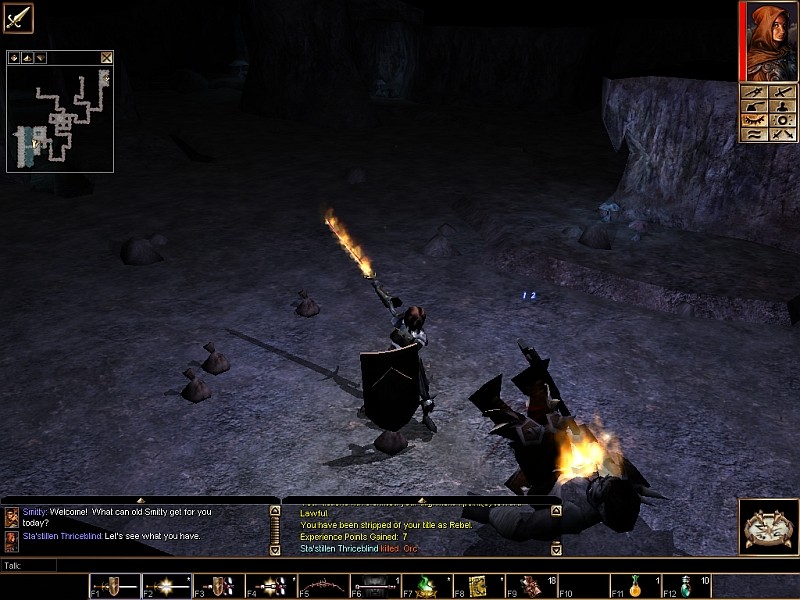 Clue #1: "You have been stripped of your title as Rebel."

Svair wrote:Clue #1: "You have been stripped of your title as Rebel."

Nope, sorry. A good try, but that's not it. Sta'stillen has been stripped of her title more times than I can remember! (I was gonna say "more times than we've had kids", but that sounds ... well, awkward ...

A good try, though, a good try!

It looks to be the cave in Vale, was it taken before ya had the gui overide?

Ding ding! Two out of three!

Yes, that's the cave from Valorian's vale, with the old level 3 setup! And yes, I've been using the GUI ever since

One more to go! The last one is especially for those who are familiar with Sta's character!

Svair wrote:Clue #1: "You have been stripped of your title as Rebel."

Nope, sorry. A good try, but that's not it. Sta'stillen has been stripped of her title more times than I can remember! ...

No, her armor. She wears a black chainmail bikini looking getup these days.

ahhhh, I didn't think she was a dark one like some of the others I've seen, lol

RayvenNightkind wrote:It looks to be the cave in Vale, was it taken before ya had the gui overide?

Yes, yes, folks we have some wieners...I mean winners!


As RayvenNightkind speculated, that is the cave in the Vale, but with its old set-up. It was a nice place for a low-level character to get some good loot early on! The screenie also shows the original skin on the GUI, which I haven't used in ages ... and after comparing them again, we can see why! And, finally, MannyJabrielle is correct that Sta'stillen's most favorite armor is pure black, with the exception of her little undies-thing (thanks to my overrides!).

So all, thank you for playing!

Thats Ace !! ... but my god, that old solid GUI looks nasty... and since when did this cave get changed?.. I remember the map layout from your screenie, mayhaps I need to go down there and take another look, see if it's different...

RustyDios, that layout changed aeons ago ... I don't even remember when, but i do remember going to hunt orcs one day and ... poof! Everything is different!

And I certainly agree with you - that old GUI is the most awful thing in the world, certainly in comparison with what we have now! I don't know that I could stand to play the game without the see-throughs and the purples, not to mention the color-graded health bar!

The only part I don't like about the color graded health bar is when poisoned, the colors are too similar and difficult to gauge at a glance

ye can change it.... open the file "gui_boxes_ingame.tga".. with something like mspaint... re-colour the original poison colour to whatever ye wish and save (ye can also do disease and the standard blue bar, whilst ye at it)...

... now here comes the tricky part, open the file in a tga editing tool (ye can find one for free onn the net), somewhere in the options will be (hopefully) an "import settings".. ... import settings from the original .tga and save the new file as a tga (with all the alpha channels set correctly).. overide your overide... ..

Thou art forgetting one fact that has been growing on me as I get into my old age...

I is getting lazy

Or one can always ask a certain purple dragon and use the appropriate magic words ... pretty please?