This thread is for more information on the upcoming game for NWCon 6.

As this game will take place on the live Aenea server, players will need to download and install the CEP 2.3 and the Aenea files.

PCs will be playing the roles of low-level orcish scouts/warriors, sent out into human and elven lands to gather intel and weaken defenses. Each will be a new character created just for this event. When creating your character for this, please keep the following in mind:

During Character Creation (before you actually enter the game proper):

Name: Try to pick something suitably Orcish-sounding, then add " [nwc]" at the end (to identify yourself as participating in the event)
Race: Half-orc only.
Subrace: Enter a number here, which will be used to script in a character head change to one used for orcs in Aenea. Here's what's available (and yes, standard orcs in Aenea have grey skin (skin color) and red eyes (tattoo1 color)...teeth take on tattoo2 color): 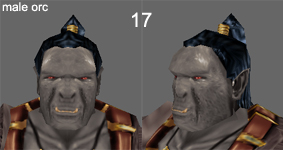 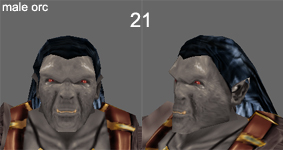 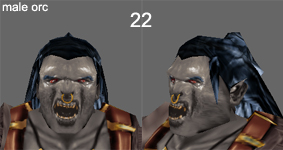 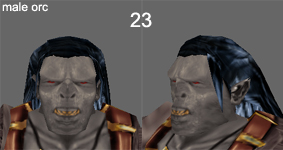 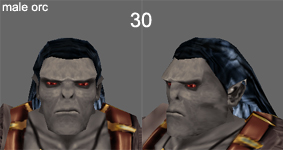 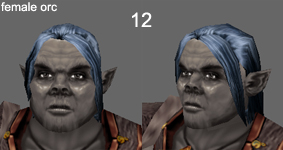 During Character Set-Up (in game in the Astral Conjunction):

Go through normal character set-up after logging in, which will give you the chance to choose:
subrace
languages known (other than Common and Orcish if you have at least a 12 intelligence)
patron deity (favorites of orcs are Ragnor or Torgat, but others are acceptable as well)
- - - if playing a druid character, you must pick Andra (goddess of nature)
- - - if playing a cleric of Zolaras (goddess of the dead), you must have a female character

Once all options have been set, proceed across dais to be sent to a special prep area for this adventure. You can get armor, weapons, and other gear in this prep area, and it's here everyone will meet up to get started. Please be kind to other players and share the equipment found in the prep area (there should be plenty for up to 10 characters to start out with).

Orcs in Aenea are just as intelligent as humans. They control an empire spread across a quarter of the main continent, which they build by conquering and enslaving several existing human kingdoms. This land is called the Empire of Blood (or K'Nort Scrar in the language of the orcs). They have changed the old human city of Tesh (once famed for its high quality steel work) into their own capital city, now called the City of Blood (K'Rath Scrar).

Want to know a few other orcish words/phrases? You can take a look at this thread.

Orcish society is one build on strength. The orcs pride themselves on their superior strength compared to the other humanoid races, and the strongest usually end up in positions of leadership. The weak are discriminated against and sometimes driven out.

If you want to compare the orcs to any other society, think of them like the Klingons of Star Trek...orcs just don't waste time on any of that "honor" stuff. They are considered evil by the non-orc races, and they often follow Ragnor (the god of destruction), but they do build and create things of their own.

Just bumping this, because it will be open to current Aenea players as well as visitors....starting in about 7 hours.

Might try to play in this tonight... Got another Dag battle tomorrow, and making weapons tonight. Not sure how free I'll be.

Notes from the challenged side;
Everyone else knows this, however...
1) put the number of your chosen visage, (face, head), in during character selection after choosing, "half-orc". On that same page, at the bottom choose, "subrace", and enter the number of the orc you want to look like.

2) Do not level until AFTER you have examined the weaponry and armor available, so that you can choose the feats required to use your chosen regalia.
*grins*
Good Luck
Lauralai

Immediately available will be weapons and armor that orcs are likely to be found using. You won't find anything wimpy and "finesse-able", just solid weapons like composite longbows, larger swords and axes, morning stars, quarterstaves, double swords and axes, warhammers, and spears. Armor includes medium armors (the equivalents of hide and chain), large and tower shields.

I attempted to give each an orcish spin, with 5-10 of each available.

I'm going to reset the server in a couple of minutes so I can get started on preparing.

!
Another great event!
That was fun. I have never played a really evil character, (I wonder if it is a flaw in my character, lol)
Being an all powerful orc is cool!
And the weaponry!! Wielding a double axe ROCKS!!
Thank you for all you do
Lauralai

Oh, that sounded like so much fun! Unfortunately it was too late for me, and I fell asleep two hours before it even started.

I'm running it again tonight, but this time it will be two hours later. So you could take a nap, play in the adventure, then go back to sleep.

It looks like it wont start until 11pm EST... and runs until 2 am though

11pm AZ time = 2 am EST. I wanted to make it available to night-owls and people in, say, the UK for NWCon 6. Not sure how much of a turn-out we'll get at that time.

I'd make it earlier, but my wife and I made plans for this evening since I wasn't going to be playing/DMing NWN until later.

From the fun that was had last night, I'll probably run this one again next weekend.

I just finished creating my orc so I think I am ready. New to this server. So far I like what I see. There was a lot of detail added to the new character intro. Can't wait for tonight.

Being in eastern time zone, the start times were midnight and 2 am for me. I'm not a night owl at all, so at 2 am I'll probably be asleep. I'm one of those morning people that gets up early, since I'm used to getting up at 5 am for work during the week. For next week, I good time for me would be simalar to Dave, 7 or 8 pm eastern, but on Saturday or Sunday. Sunday afternoon would be good too.

Thank you The Amethyst Dragon for running it again next week.

I may try to make it tonight ... i get off work at 10ish pm est, and may snoozle for a bit before getting up and logging on ... we shall see! Sounds like a blast, though! Hey,

- any quick advice about orcish names? *wanders off to find name generator*

Eric, You might want to peruse the orcish vocab thread and work off some of those words (link in first post).

! That run was a boss idea (except i was a bit daft with the goal of it) and I did enjoy sneaking around as a bad-arse orc dude! sorry I had to cut out early (at 3:45am!), but I had to get up and if Rebecca would've found me in the basement that late at night, I would've been found there in the morning... *splat emote*

So, are we on for this weekend sometime?
Is this one happening?
Let me know
Lauralai

Ah, yes. I'd nearly forgotten. Thanks for the reminder.

Sorry ad. I is ooold
Sometimes,when I is thinkin, I just falls asleep
which is what happened today
I just woke up
I am guessing a little late for the event, planned for 5pm, my time

hope it was a great event

there were cows?
rats, missed it
...
thinking of something cool to make up for it

I'm sorry, I missed it too.

I had company all evening.

I guess fate just doesn't want me to be an orc. lol
I never tried a bad girl before, so I would probably be too nice for an orc. lol

Doh! I missed it too.... I had checked the forums friday and didnt see nothin, and I was busy all day yesterday so I never got the heads up

That's ok. The code and stuff will remain in the module for a while, so I'll run it again sometime with a bit more lead time with announcing.