Got side-tracked yesterday by a creature model that I haven't liked for a long time.

So, a little digging in the CEP models turned up an improved version. It still needed some work, so I edited it in gmax slightly (moved tail and wing nodes), then created a brand new skinmeshed lizard tail model (with matching texture!), edited a couple of 2da files, and the end result is the "evolution" of the lizardman.

The older BioWare model looked too strange to me. Tall, not very "lizard-like", with a funny little tail, sporting some strange armor pieces, and wielding "modern" weapons. The new one is more reptile-like, not tall but long with it's big new tail, unarmored, and wielding a more primitive stone-tipped spear.

The one on the left is the newer version, the one in the middle is the older BioWare version, and the bandit is just for comparison.

Coming soon to a PW near you (ok, just to Aenea). 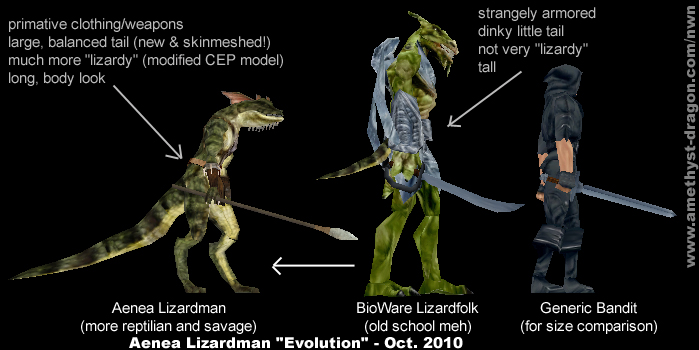 And this is yet another beautiful example of why we love this world!

So does this mean the single solitary lizardman in the swamp might be getting some "lizard love" and finally have a village of his own, with some new shops/dungeons ...

I like it, it looks a lot like the NWN2 lizardmen... which were much better. Man that Bioware one is ugly.

Christopher Robin R2
Player with Too Much Time