Sorry for dropping out suddenly in the middle of the fight.

My room gets very hot, and my PC overheated and locked up. I installed the AC, but now the PC won't boot. I think I know which part needs to be replaced, but the parts store is fracking closed... Argh!

So until I get parts, I am offline except for my iPhone

that sucks. sorry to hear something fried. i know what thats like and its never a good thing. but thats what happens when you go to the dark realms! you get burned!

Best Buy and Newegg both said they had the right part for a socket 939 board, but alas they were incorrect (and Newegg initially wanted me to pay more to ship the incorrect part back to them than I originally paid for it, but I got that ridiculousness sorted out) so, I ended up having to make one from other parts, and was out of commission for 4 days as a result. Got it sorted and should be good to go now though!

A picture of the guts of my machine after I ripped out and replaced the heat sink & fan (with a jury rigged custom heat sink & fan combo that required shaving a metal bracket and inserting a tin foil wedge a la Macgyver to mount properly, hehe - couldn't find the right kind of mounting brackets for my board and socket), power supply, and video card. The red area circled is where the tin foil was inserted, though it was too small to be visible, sadly. Shoulda taken a pic before I reassembled the whole shebang: 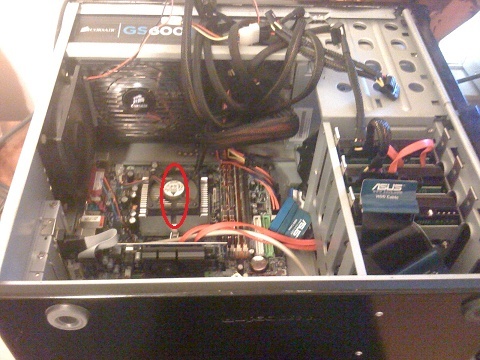 It's an older motherboard, I have had it for like 6 years... But all the way from windows 2000 to xp to windows 7, it has been awesome and stable.

I will be a sad man the day I have to decommission her.

One thing that cheesed me off was that the retaining nuts on the underside of the board which ate supposed to hold the mount points for the heat sink's retaining bracket were not properly installed at the factory.

I had never had an issue before, so I never looked at the backplate underneath the processor before, but when I first tried to mount my custom tin foil machined jury-rigged heat sink, those nuts actually popped up through the screw holes in the board, which should have been impossible without physically damaging the back plate under the processor.

When I stopped fuming, I tore the machine apart completely and took the board out, only to find that the nuts were not properly slotted in the underside of the back plate (which would have prevented the 'popping' issue), and were instead just sitting between the back plate and the board... Grrrr

Fixed that and everything went smoothly after that for the most part... But I was flabbergasted that the board had been improperly assembled at the factory, and even more shocked that I hadn't noticed for 6 years!