I'm planning on putting out a hak update on the 18th (in a couple of days).  A couple of files will get updated.

I've never been terribly fond of the NWN iron golem model, so I put a bit of time in last night and today to whip up a replacement.  Mine is based on the Q stone golem.  It's darker, bulkier, and looks more like animated iron than a "tiny-headed, weak-waisted robot in a D&D game".  I also made two variants, one partially rusted and one completely rusted.

Macedone will be getting retextured so that it looks a bit more like it's been lived in for a long time.  Any other location that uses teh "city exterior" tileset will also get retextured.

I did a little experimenting with textures, and I'll be adding two new elemental models.  These should start to show up in-game in the near future when someone summons up an elemental in certain locations.  I made a lava & obsidian version (for when summoned under Sunset Cauldron, inside Forge, or in the Dark Realm), and I made a sand & rock version (for when summoned underwater).  Elemental properties won't change in these cases, just the appearance. 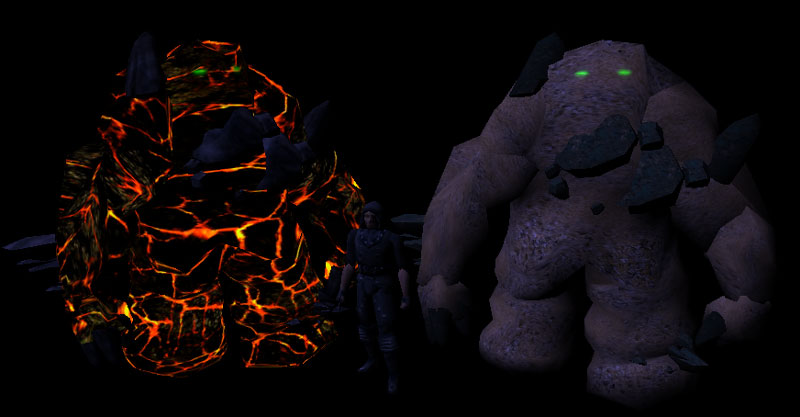 Clay & Stone Golems: I finally located the problem with the Project Q golems and their lack of animations and fixed it for this upcoming hak update.

Web Placeables by PLUSH HYENA of DOOM: I'm adding some improved web placeable models that should blend better with their environments.

Forge Placeable: I'm adding a new model for blacksmith forges, converted a while ago  from NWN2 by thegeorge.  This model just wasn't included in the CEP, so I didn't have it before.

Beehive Placeables: Found a good beekeeper's hive in with the NWN2 conversions by thegeorge.  I'm also working on a "wild" beehive model.  Both will be used as sources of harvestable honey (wild ones replacing a couple of existing ones and beekeeper's ones will be added to several farms).

Sweet sweet sweet! Those heavy irons look wicked! Hey, any chance that you can add some armor parts from PHoD? Not the big-chest ones, but the foot/shin/thigh/pelvis parts ...

Wow! Really loving those Golem models.. gives me an idea for a "war torn" dungeon... loads of Golems in one half... leading to tunnels with rust monsters in the other half.. the PC would enter in the "middle" of the major conflict area... maybe a quest in place from the Golem creator to rid the place of rusties; "bring me sixty rust monster carapace and a leg from the rusties queen"....

I want a good two hours free from chores to log in game and get some playtime in .... ...

That's pretty awesome; those iron golems are so much better looking than the default bioware appearance! Loves the elemental spin, too!

Number of posts : 1132
Age : 407
Location : Europe
Main Character : Célestin Chevalier; Knight Champion of Dalix. Protector of the Innocent. Slayer of Evil.
Other Character : Angelique Nightstar; Arcane Archer.
Personal Quote: "The way of the bow is simplicity and beauty combined with power and discipline."
Other Character. : Bruce Li; Wanderer and Practitioner of the Dragon Paw Style. & Cherry; Starchild of Jewel n' Chancetaker of Lysis.
Other Character.. : Anna, Weaver of Illusions. - You can read about all of them following this link to their Biographies! =)
NWN Username : I await You in the End
Time Zone : Central European Timezone
Registration date : 2010-12-11

Decided to throw in a new spell for bards at the last minute.  Edited 1st post here to slip it in at the end.

Time to start compressing files to get them uploaded.

The Heavy Irons are awesome! Very, very sweet creatures! Only thing that bugs me is how they kick - I would've thought that something so heavy couldn't pull off a forward flying kick the way they do. Helluva cool, though. And the fixed animations for the stone golem are awesome, as well. (Didn't have a chance to see the clays in action, that will likely be next trip!) Super work,

! That's why we keep coming back for more!

Actually.... I dunno if it's something on my end, but Macedone's tileset doesn't look any different.  Cleaned out the override, reinstalled just the basic haks for aenea, still no change that I can discern.

The are between the gates and the trade district looks a little different... grassy instead of cobble, but the high district, docks and trade district still look like default city exterior tilesets.