It's a ticket to the Great Hall currently. Not much of a victory there...especially not for something which come with such a great price tag! 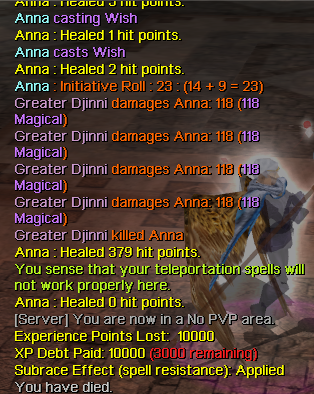 It looks like the djinni was casting one of the epic magic spells which can be researched by epic casters via the destroy seed, aimed at the caster.

It only works when the caster is in an area with enemies. Most likely intended, yes? What's Not intended is that it kill the caster instead of their enemies.

As a side note: If you wish for it in an area without hostile targets the djinni just disappears without doing anything - still extracts the price of 5k xp however!

Number of posts : 1132
Age : 407
Location : Europe
Main Character : Célestin Chevalier; Knight Champion of Dalix. Protector of the Innocent. Slayer of Evil.
Other Character : Angelique Nightstar; Arcane Archer.
Personal Quote: "The way of the bow is simplicity and beauty combined with power and discipline."
Other Character. : Bruce Li; Wanderer and Practitioner of the Dragon Paw Style. & Cherry; Starchild of Jewel n' Chancetaker of Lysis.
Other Character.. : Anna, Weaver of Illusions. - You can read about all of them following this link to their Biographies! =)
NWN Username : I await You in the End
Time Zone : Central European Timezone
Registration date : 2010-12-11