Sykee (The Union of One)

Sykee (The Union of One) 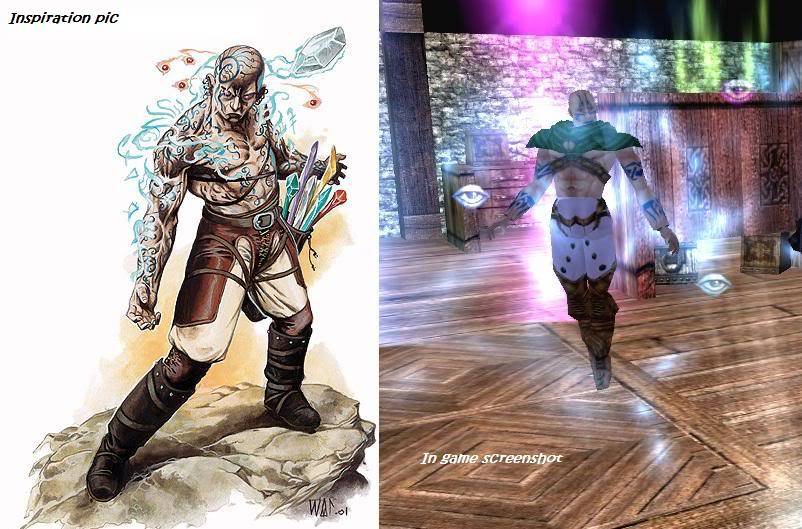 The Union of One was not as he is today. Being of Talaire birth, his lineage stems to another world. He found it difficult to learn his families natural born talent of *Psionics*

Given unto a high ranking psion known as Sha'k he found his master was a bullying mentor.
Repeatedly beating Sykee over and over when he failed even the slightest of
skills. Months passed and the beatings continued almost daily. Finally
mastering the skills of a psion his family released him as thier eyes
and ears of the realms as they are want to do..however unbeknownst to
even the highest member in thier family the constant beatings had a severe
effect on Sykee.

His mind shattered under the pain and pressure
his master placed on him and now 5 complete minds and personalities
occupy the same body each with goals of thier own..but usually
cooperating towards a common goal. Together these 5 entities refer to
themselves as *The Union of One*.

They still continue to potray the single entity when amongst those who
wouldnt understand..only confiding to others thier true nature when they
are sure they can trust them. Sometimes however they slip up and speak
of themselves as us or we. When they do communicate with another
telepathically 5 voices intone as one..giving a disconcerting echoeing
effect in thier recipients mind.


These 5 entities are listed below.

The
usual "dominant" personality, this personality is closests to the
original before the beatings, generally a helpful and kind individual
he does his best to help those around him. When the 5 minds recognize
that thier multiple telepathic transmissions are disturbing those they
are speaking to....they allow this personality to be thier mediator.

This personality controls the telepathic discipline.

This
personality,one of the two "female" pesonalities...is a very quite and reserved
individual acts almost as a young girl, viewing the world around her with wonder.
She rarely speaks save when she is curious about something and usually she asks
the union to ask the question for her.

This personality controls the Psychometabolic discipline.

Sca'll:
This
personality is a the "wiser" of the 5 minds, having an older "fatherly"
figure type of mentality. An open minded individual he is always seeking
new ideas and interesting bits of information to add to his collection.

This personality controls the clairsentient discipline.

Meena:
This
personality is the thrill seeking, always urging the group on to bigger
and better things. Only happiest while in the heat of battle it takes
all the union can do to keep her happy and when not happy...she sulks
refusing to speak to anyone until her desire for action is fulfilled.

This personality controls the psychokinetic discipline.

Chork:
This
personality is the strangest of the 5, with a wandering personality.
Never the same attitude for more then 10 minutes...his attitude
fluctuates from good to bad to cheerful to sad not even the union is
sure what he will be next.

This personality controls the metapsionic and psychportive disciplines.


Finally
there is one last personality in the mix....it never speaks...and has
only been "seen" once by the union...and they refer to it as the "Terror"
The Terror only appears under extreme duress or rage and when it does...
all other 5 personalities vanish as the terror releases the full vent of its rage
on all oppenents and even friends if they attempt to restrict its desires.
Even the Union fear its presence as they lose thier existance when it manifests.