My favorite month, since it's got Halloween at the end of it.

It also starts to cool off here, so I can finally turn off the stupid air conditioner, at least until about noon.

Halloween is the "fun" holiday, since it's not based (anymore) on anything "serious"...it's all about the candy and spookiness. Halloween also leads off the "good three" holidays here in the U.S. (Halloween = candy/costumes - Thanksgiving = food - Xmas = presents).

I agree... this leads into my favorite part of the year. I've always loved the fall, and I am a Halloween fanatic. I've been a horror/fear buff since I was a little kid.

Every October I spend as much time as I can reading Poe and De Maupassant, and Blackwood, and (my personal favorite) Lovecraft... and I watch horror movies and decorate. It's so much fun!! Sadly, this year I will be traveling for Halloween. Oh well.

I like to hold a Halloween party/get-together with friends and family just before the 31st, and I do all the cooking. Here's pics from a couple years ago, just to make you hungry...or not.

First, we have cookies...pumpkin-shaped sugar cookies and good ol' chocolate chip. The green geletin in the back, all broken up with a fork, actually gets spooned into a glass of clear soda (like Sprite or Sierra Mist). 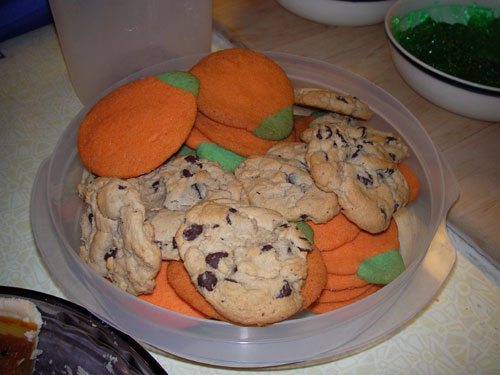 Next, we've got my take on pumpkin pie... 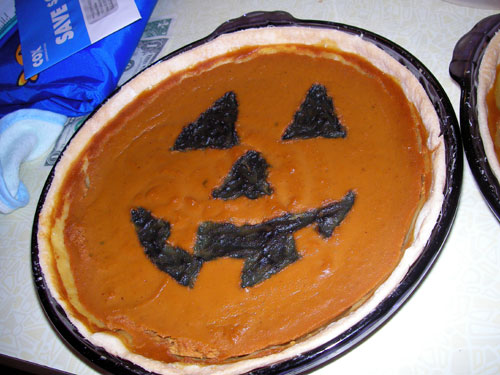 Now, we get to the first "icky" dish...Witch's Stew (aka barbeque/sloppy joes with food coloring) 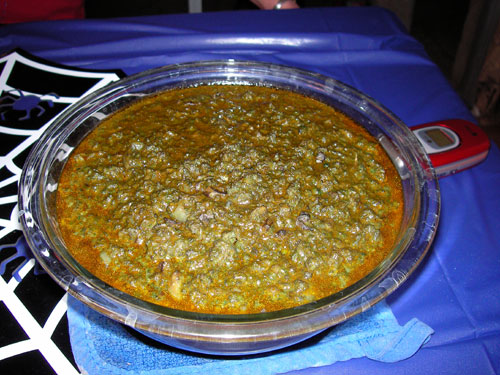 It looks like a neighbor recently lost an arm in the fish pond...I may be recovered it and added it to the menu... 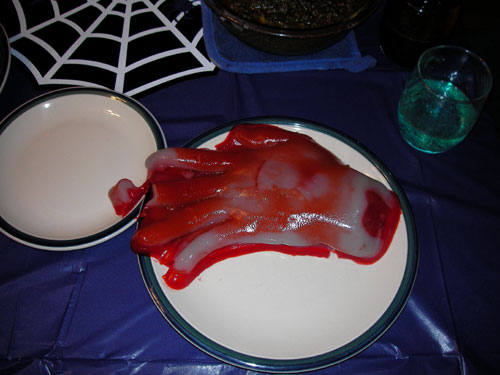 Got a thought on this one? It's really mashed potato, ready to be served with a blood red gravy. 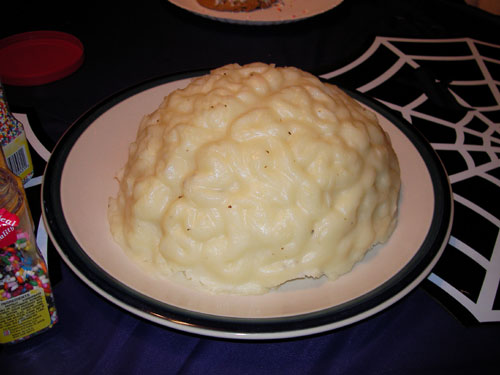 Finally, we have the most photogenic dish, "freshly donated" by the neighbor across the street... 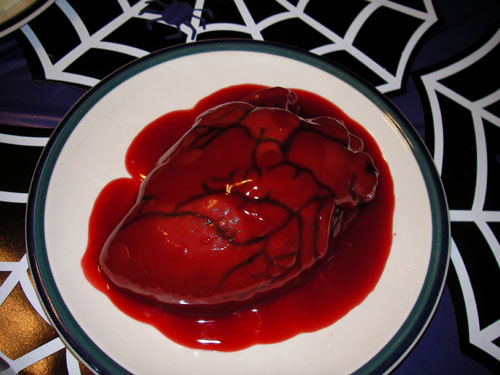 There are other things that go on the menu, like steamed potato skeletal hands (I forgot to snap a pick of them...they're just raw potato carved into hand bone shapes, then steamed so they keep their shape) and "potions" (various drinks with odd food coloring served in small 1 oz glass vials).

What a strange, and yet completely awesome dinner that must be! We just have the kids collect the candy and gorge on it for days!

I always like to dress up for Halloween, but with the kids and all, I can't be at my gory best! Oh well! I still get to be creative - one year we made Abraham a taxi costume out of cardboard! It rocked (not sure if have pix)!

That is some impressive cooking. Seriously

Oh, and the heart actually bleeds when you slice into it with a big butcher knife.

I'll bet that's a big hit with the kids! My Tabi would adore it!

Ooooh.... Ameythyst, how did you make all that stuff? (I love Halloween, too, and wouldn't mind you passing down your food-mold-tricks. >> << Please?) I especially like the heart. What did you make it out of, and what did you do to get the veins in there? (And how did you get it to bleed!?)

The brain is just some mashed potatoes with garlic powder and pepper. I have a gelatin mold shaped like a brain. A little non-stick cooking spray, then carefully pushing the starchy goodness in with a spatula. The gravy that goes with it (not shown) is just gravy with lots of red food coloring.

The hand...another gelatin mold. This time, after a quick coating of non-stick spray, I started by filling it with an unflavored gelatin (so no color) mixed with a little skim milk for the grey. Then, after it set up, I scooped out much of the interior and filled it with cherry gelatin (for the bright red). Since the interor of the mold is non-sticked, the grey separates a little and allows some red to go around the outside.

The witch's stew...just my sloppy joe/barbeque mixed with some green food coloring.

Pumpkin pie...This one I could eat by myself within 15 minutes. After it's cooled off from baking, I break apart the surface just where I want the dark spots. Then I mix some black food coloring and a few drops of water and paint the roughed up sections with a paintbrush. The pie filling holds onto the darker color as the water evaporates (I paint it on really lightly).

Chocolate chip cookies...only half a batch of dough ever get's cooked at a time at my house. The other half get's eaten with a spoon.

The pumpkin cookies are a sugar cookie recipe my wife found several years ago, actually written as a candy corn cookie recipe (with white, orange, and yellow sections).

For the heart, I walked across the street with hatchet in hand, knocked on the neighbor's door, and when he opened it... just kidding!

Another gelatin mold coated with non-stick spray. Filled with black cherry gelatin and a small amount of skim milk (black cherry is darker, and the milk makes it cloudy and look more like "meat"). As it starts to thicken, I add the "blood packet" so it stays suspended in the middle of the heart, hidden away. The veins are just more black food coloring diluted with a few drops of water, painted following the veins that are part of the gelatin mold.

The "blood packet" was a bit of work. A large can of cherry pie filling, strained to get just the syrupy goodness. Then I thinned the result with a little water and some extra red food coloring. Made a miniature cone-shaped bag by cutting a zip-top sandwich bag on the diagonal so I had the corner. Filled with "blood", twisted closed and held with a new rubber band. Inserted into the gelatin when it's thick but not set.

Make the first cut a stab with the point of a big scary knife to puncture the plastic and make it bleed all over the plate. Be sure to remove the plastic before serving! In the picture, I had actually spread some of the extra "blood" over the heart when I put it on the table.

I got the gelatin molds at a couple of different seasonally-open Halloween stores. This year, I'm going to add a peach-gelatin stomach (since even Wal-mart sometiimes has good stuff).

Tip for saving money: I try to do all my Halloween shopping on November 1st (when all the Halloween goodness usually goes for at least 50% off). Just try to get to your store(s) early, since lots of others seem to have the same idea, and the 1st is a Saturday this year.

Sheesh.... you could do a documentary on this topic...

Anybody happen to be on good terms with a network exec?

Wow...that's pretty neat. I'm not half as creative.

I dressed up as Captain Malcolm Reynolds for my college's yearly 'pretend not to be celebrating Halloween' celebration last night.