While it still looks OK, how much better would he look in silver? 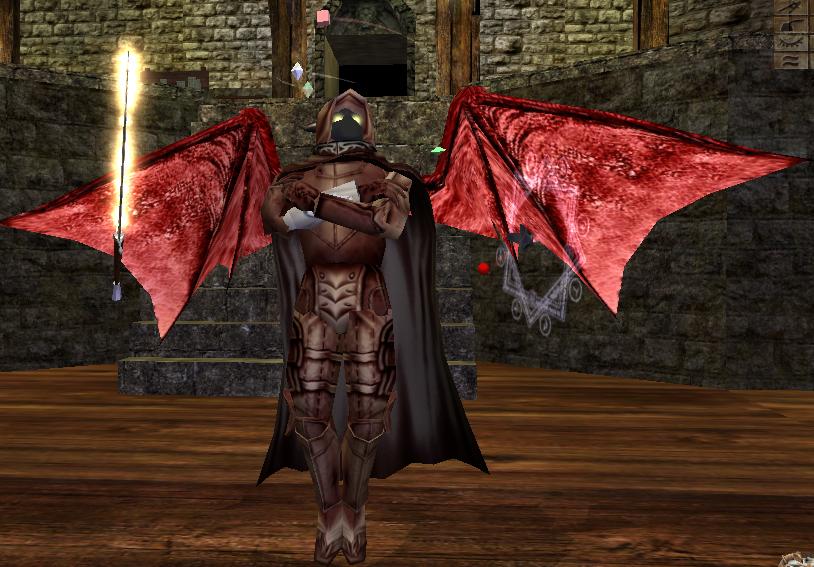 I agree silver would look better. is that a hood? Yes it is...Still no visible faces in the hoods...

Heh... if you've ever thought your platemail wearing tank was making too much noise with each footstep... dont feel bad... check *this* out... even with ascended bonuses.... Gabe would be considered.... 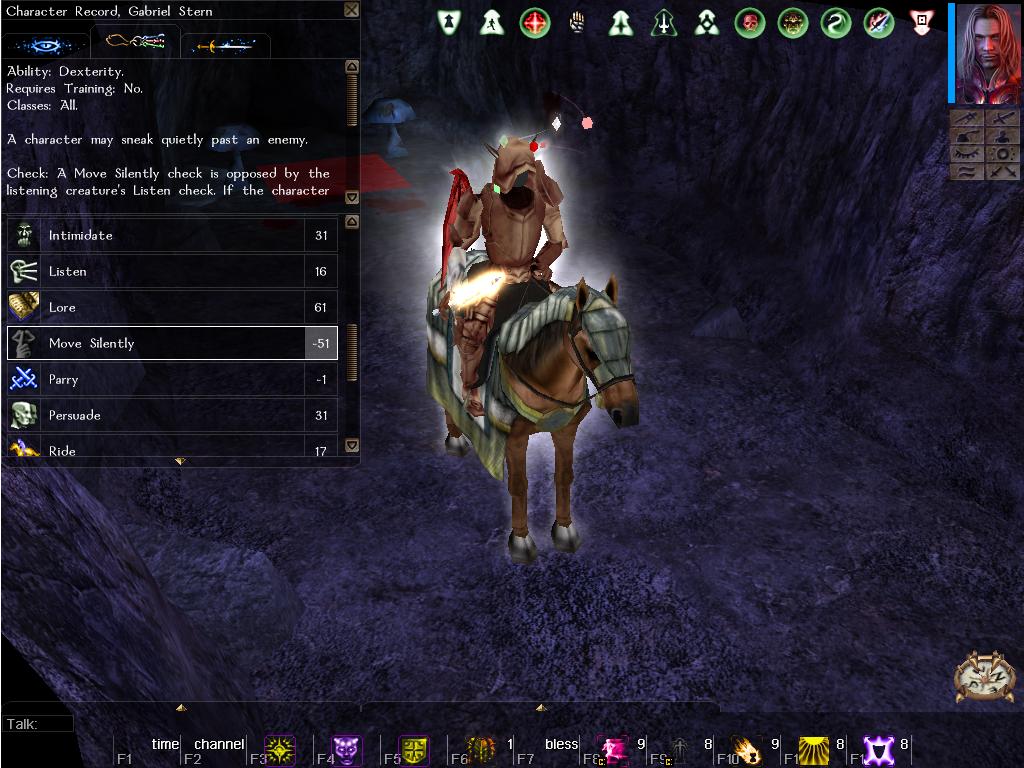 Well, not being able to *see* him helped... but you did still actually *hear* him LOL

You don't understand. I may have heard the hoofsteps, but I thought they were my own horse's. It was only when you asked later if I heard anything that I had to think back and see if there was any audible anomalies. :-)

I really had no idea, and I'm the suspicious "I bet a DM is watching me right now" sort of guy.

Finally, Gabriel gets a suit of plate that allows him to cast spells *and* looks decent!!! 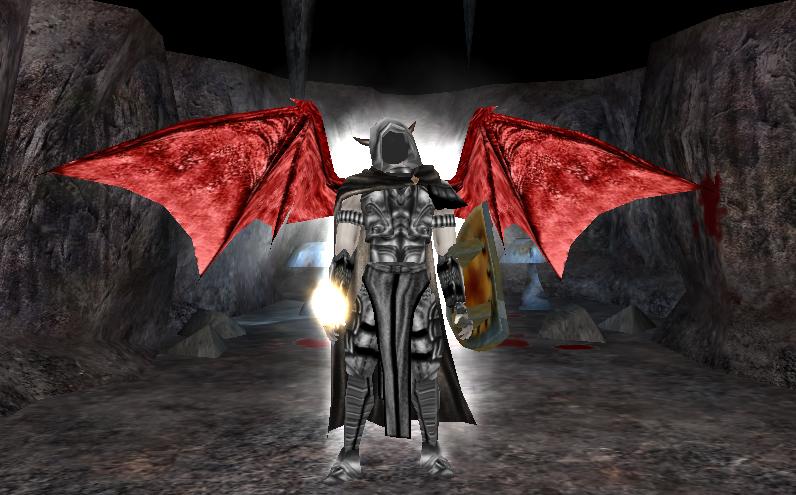 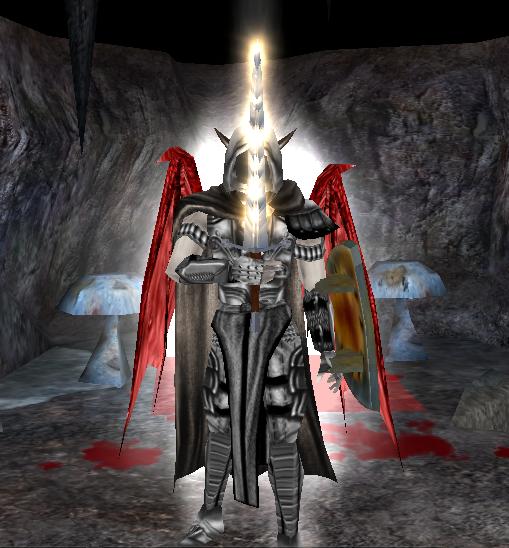 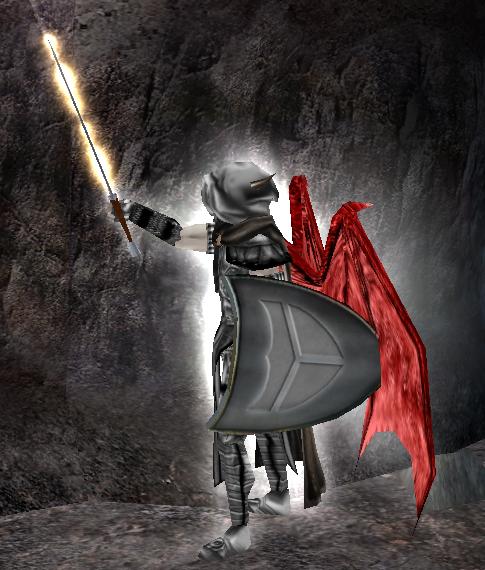 Now if only becoming a brass dragonsoul wouldnt screw up his AC....

My newest shot of Gabe, using the VFX hoods, so you can see his face and glowy eyes 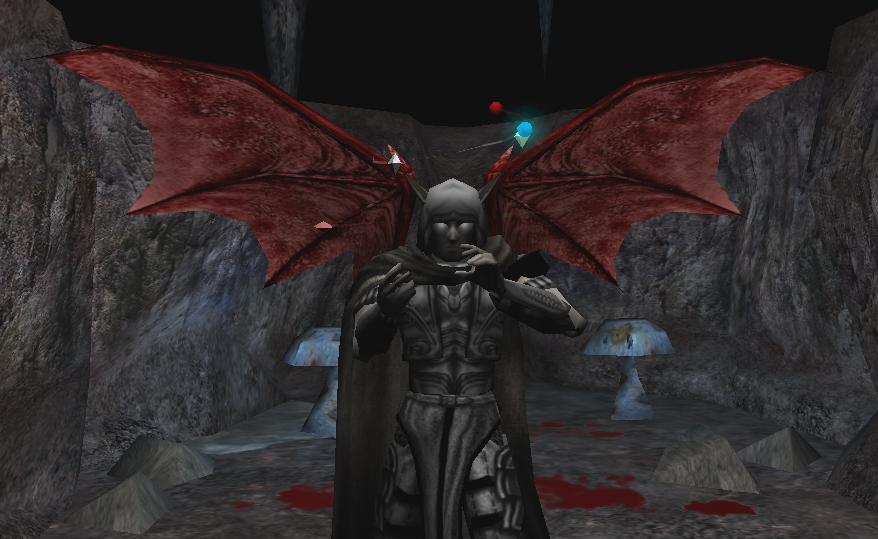 now that is uber sweet !

If I know you didn't like the build in fire-immunity from RDD(or the similar red dragonsoul), I'd say silver dragonsoul wings on Gabe would rock.

As is though... his whole grey look makes me think "One mean ironheart" as well :-D

I can get fire immunity from Brass Dragonsoul.... problem is the AC.... Gabe's AC is like the #1 facet of his build... and he is already maxxed on dodge AC, so with dragonsoul his would actually drop down.... still, Silver would color match better yes.... but then no fire immune.... its like none of them really match what I want compared to what I have.... so for now, I will stick with him as is, sadly.

At the point of a Paladin's Blade! 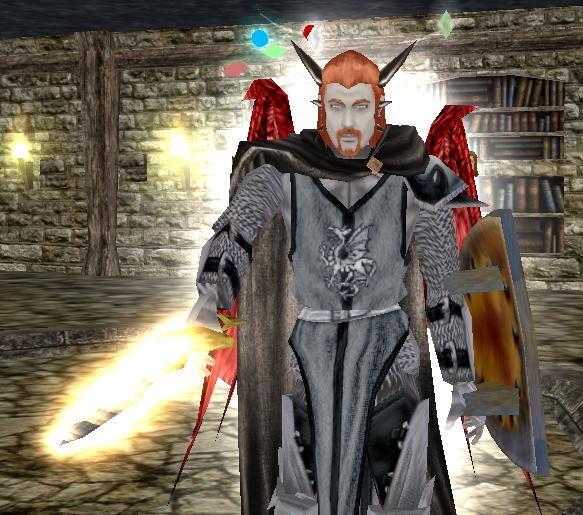 Now if only the darn VFX head effects like hoods and hats would appear like 2 millimeters higher up on the model.... then i could give him his hood back, and crid's wizard hat wouldnt look like it comes down past his eyebrows.

Yeah I tried out a new hat for Alundaio only to be dissapointed that his hair and ears stick out way beyond the hat. D: Atleast I can put it as a cloak.

I quite like Crid's look.... mean, thoughtful, deep in his own personal conundrum... to be good or really really bad.... 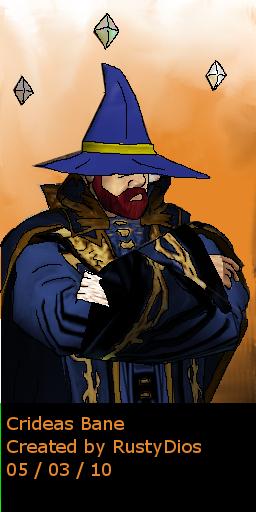 Btw, that was a screenie of Crid I took during the first "Gauntlet of Champions" (some sundays ago), I have the picture made up as a portrait....

Thats cool, thanks for posting it, Rusty!

I think the look as it is now gives him the "quiet and aloof" demeanor... which is neat, but doesnt quite fit his personality. I mean, he is a fairly personable fellow, and oftentimes rambles on before catching himself

Some new ones from the Grand Negation, Home of Demon Lord Horaxona, deep in the heart of the Dark Realm.

With Gabriel fully ensorcelled, Horaxona struggles to find a way past his defenses: 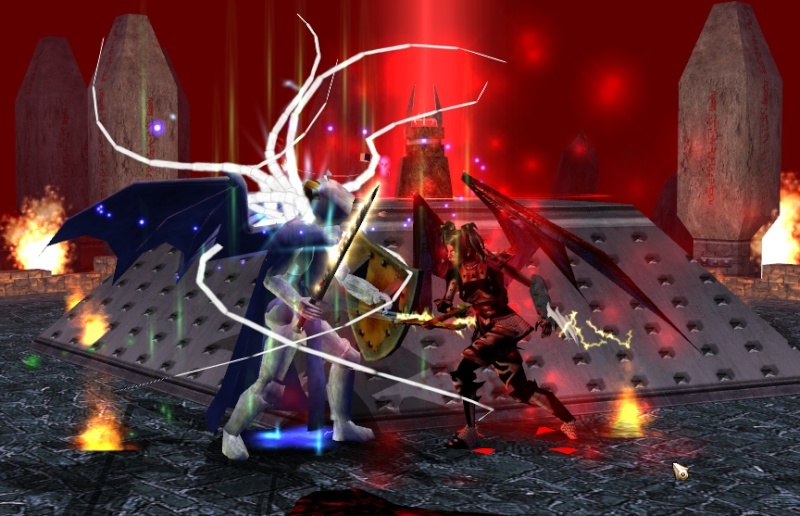 As Horaxona's rage and frustration grows, her aggression gets the better of her.
Gabriel exploits the opening - his Redeemer's Blade striking true, blasting her with divine and positive energy: 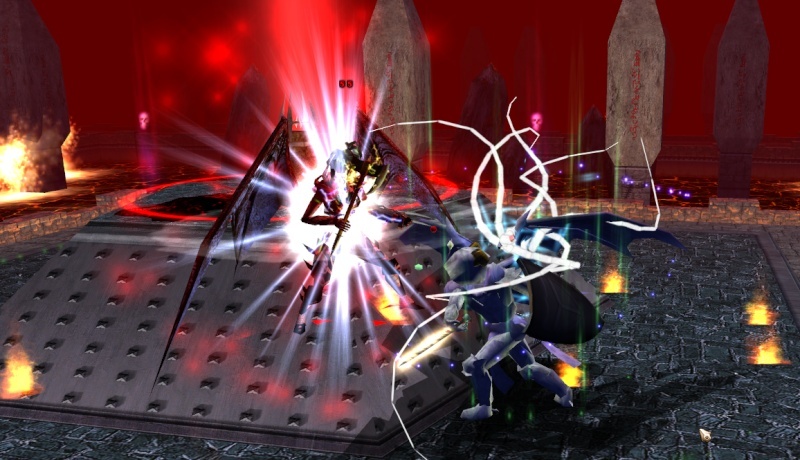 Sensing his advantage, while advancing on the Demon Lord, Gabriel extends his blade to her throat and shouts, "Yield, Fiend!" 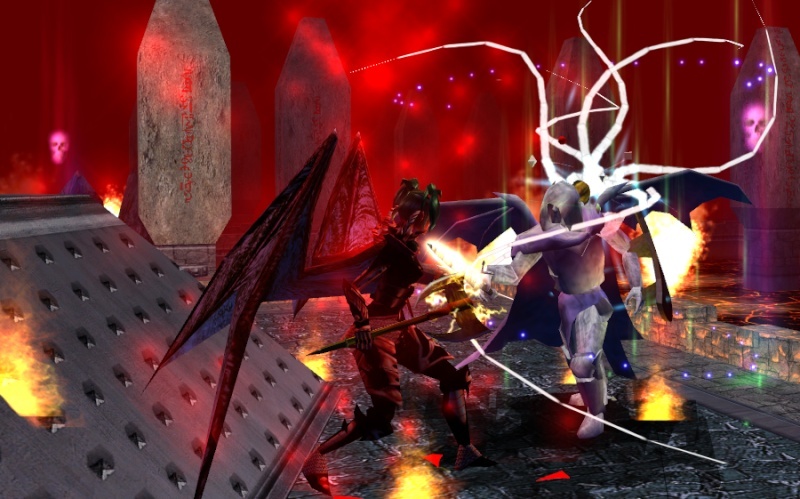 Horaxona deftly slaps his blade aside, then plants her feet and drives her shoulder into Gabriel's chest, pushing him back on his heels, near the edge of the lake of nearby lava.
As he adjusts his footing to regain balance, he anticipates her follow-up flurry and catches her with a defensive downward slash, holding her at bay: 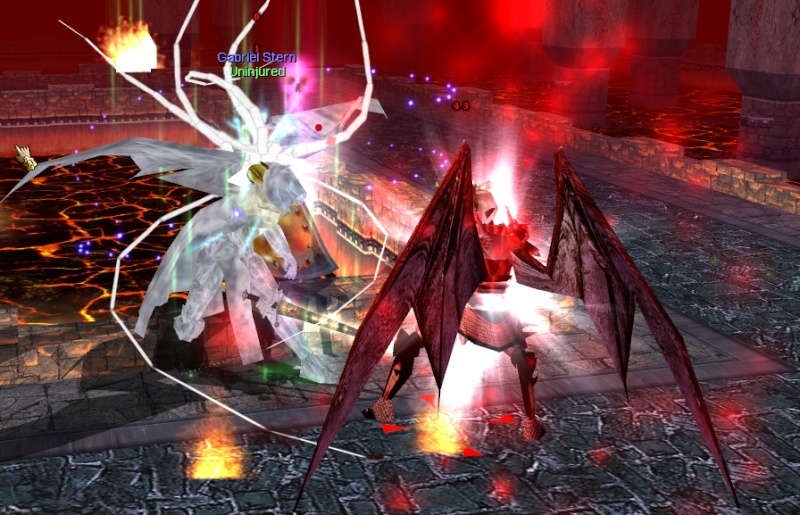 Her intended onslaught blunted, and caught offguard by the unexpected swipe, Horaxona gives a few steps of ground to take position on the dais nearby, claiming the high ground advantage.
Gabriel seizes the new opening, forgoing a strike and quick-stepping to circle to his right, gaining position just slightly above Horaxona on the dais.
After a quick exchange of slashes and parries intended to drive her guard low, he leaps up and brings his blade thundering down! 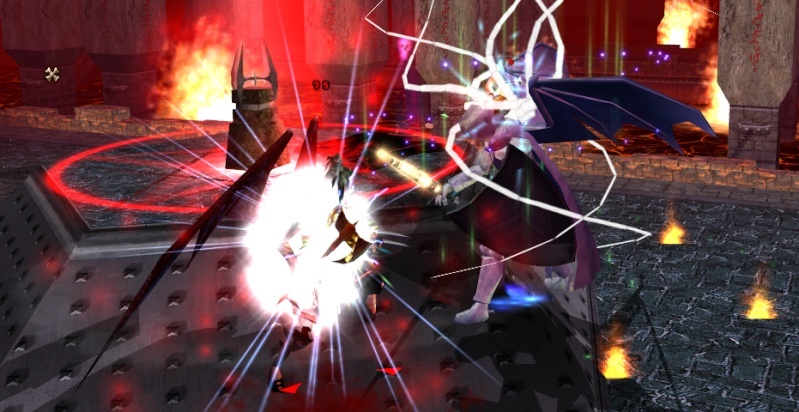 Yet again blasted with energies that are anathema to her demonic form, Horaxona feels the agony of Gabriel's hallowed blade cleaving through her shoulder, and down to her heart.
As she gasps in vain, her mouth forms the words of shock, "What are you, mortal?!" then the malice in her eyes fades.

Gabriel flicks the blood from his blade and sheathes it. He looks down at her broken form, and his fangs slowly slide out as his mouth forms a snarl.

"Not 'mortal'. Dragon-blooded, Vampire, and Crusader of Dalix, the Ironwilled. I knew my enemy, but you knew not yours. You had no chance."

He sinks his fangs into the ruined neck, drinking deeply.