I am finally experimenting with actual cloak models (rather than just textures like I've done before).

My first experiment, done as a proof of concept, was to add a hood to a cloak so that it would automatically match the coloration of the cloak and would flex and bend when the PC moves his head.

And ya know what?  The damn thing worked on the first try.

Shown here is the proof of concept model I did.  The hood is NOT a VFX...it's part of the cloak model itself. 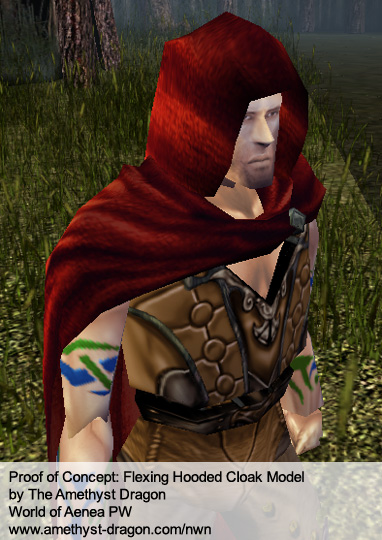 The texture positioning still needs work (I'm using existing textures for this model), and I need to work on meshing the hood and cloak better for a final model and then try to resize/mangle the thing for other needed models (normal male, heavy male, normal female, heavy female for each PC race).  And I don't know if they'd play nice with the alternative combat animations without making even more versions...I guess I'll tackle that if/when I get there.

This hooded model isn't intended to replace a normal cloak model, but to provide a new option for those that want it.  If everything works out as planned, perhaps a function to alter an existing plain cloak appearance to the matching hooded version can be done.  It would have to be optional, because like the VFX version, this version would cause model clipping with any hair that sticks out too far.

Seriously though, that's amazing. I have always wanted the game to have such a cloak. Leave it to the Great Purple One to make it!

yOOOOOOO THIS IS REALL YCOOOOOOL

delivers once again! Can't wait to see them in-game! That'll free up some helmet space for some atrophied PCs, fer shur!

Great for rainy weather. Thanks!