A story and a prank

A story and a prank

So, someone I live with basically burnt a bag of microwave popcorn recently.

The popcorn was melted and fused into a solid black mass inside the
bag, and the there was so much smoke that even after an hour with
the exhaust fans on and the nearby door open, the kitchen was still
hazy with smoke. The scent lasted over 24 hours...

This debacle led me and the others to grant her the nickname 'Torch'.

We had been making all sorts of jokes about it all week. She was a
pretty good sport about it all... and we were all thankful that we stopped
it before it started a fire...

One of my recent gags was to write on the erasable board that she uses
for the shopping list a line entitled "Fireproof Popcorn".

Today, I got it into my head to expand on that gag.... I decided to
invent a fake brand of fireproof microwavable popcorn. I named
it "Can't Torch this". Then I did a little poor quality graphic
editing and came up with an image of what the packaging
would look like (complete with popped kernels wearing MC hammer pants): 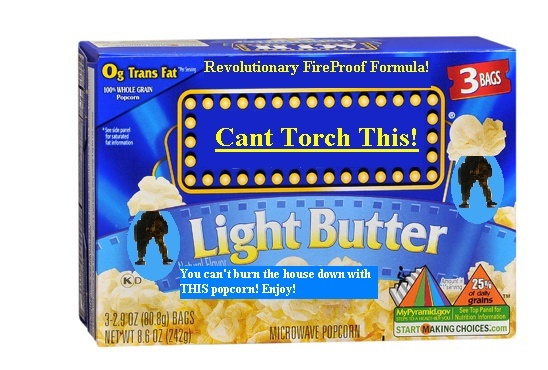 I printed it out, and taped it on the refrigerator door, with the words 'Problem Solved"
above it in black magic marker. Needless to say... she is not talking to me right now

gawdamnit, now that song is stuck in my head.

OK, I actually laughed out loud at this. I think it's the hammer pants that really makes it.

Amethyst347 wrote:OK, I actually laughed out loud at this. I think it's the hammer pants that really makes it.

Yeah, I felt that little touch was the coup de grace.

Jokes sometimes backfire. Usually it happens in the immediate sense, when you make a crack and then the target or the situation cause you to become embarassed right away.

In this case, it took months.... but yesterday morning, as I was making my breakfast.... well... I like my bacon very well-done, extra crispy... I usually cook it in a pan just to the point of burning, then I wrap it in paper towels and microwave it for 20 seconds to cook the rest of the fat/grease out and have the towel absorb it. To me, it tastes better, and is slightly less bad for me.

Well, I earned the nickname "Torch Jr." when I mistakenly programmed the microwave with an extra zero.... 20 seconds turned into 2 minutes.... and my bacon was a crunchy black mass fused to the paper towels. The smell took several hours and a good microwave cleaning to get rid of.

Ahhhhh! Burning Down the House! *huhuhuhuh*

Hoisted by your own petard! Bravo to you, daveyeisley!