I was given access to the new fire giant model that's going to be included in the upcoming Project Q version 1.7.  Created by Pstmarie, it's a very cool model that includes blackened armor and a striking head model from NWN2.

Since I asked nicely, Pstmarie let me download the fire giant early so I could mess with it.  As is, it uses the existing fire giant animations.  I made an alternate version that uses full dwarven animations (scaled up, of course), so they'll be able to use bows, crossbows, emotes, etc. (rather than just swords/clubs/unarmed).

Not sure if he's going to include my alternative models in Q, but I'll make them available in the Aenea haks when Q 1.7 is released anyway.

New fire giant portrait I made.  It may not look it, but with his helmet this guy stands just over 3 1/2 meters tall. 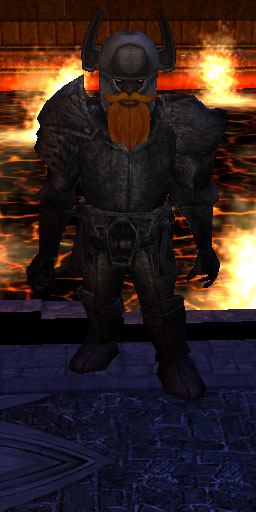