Edit Jan. 18: Putting the system live today and working on spreading it outward from Valorian's Vale. For much of it to be visible to you in-game, you'll need the aeneahak_updates.hak file I just uploaded (it's about a 12 mb download).

I'm working on a little something for Aenea that will kind of bring the in-game seasons into view more than just falling snow and cold streams. I've scripted a simple system that spawns in various non-interactive placeables at different times, then despawns them five minutes after PCs leave the area.

Can any of you suggest other little things along the same veins that might be good for automated seasonal appearances? I'm trying to figure out what all to include so I only have to edit each area once to install the system (instead of multiple passes through every outdoor area...again).

I thought about covering the streams and rivers with flat planes of ice, but it makes things like waterfalls and waterwheels look very out of place.

I'm not putting in so many that they cover an area, but just enough to give a hint as to the seasons.

And no, I'm not overlaying large placeables over trees and such. It's possible (I've done a proof of concept), but would look weird since such placeables would vanish from sight as soon as your PC is 40 meters from the placeables (it's a game engine thing). Also, I'd have to modify a ton of tileset models to accommodate something like that...probably almost as big of a project as Reforged was.

For several actual years now, commoners have spawned in with cloaks during winter.

Not fully bundled up, but wearing at least as much as PCs do to stay warm.

This is going to be a lot of area editing. I've only been doing close areas for testing (mainly the Northwest Road). It's mainly dropping a lot of waypoints around the area, which the area enter script sees and then spawns in placeables at those locations. The script that cleans up remains and dropped junk after PCs leave an area is responsible for getting rid of the placeables. 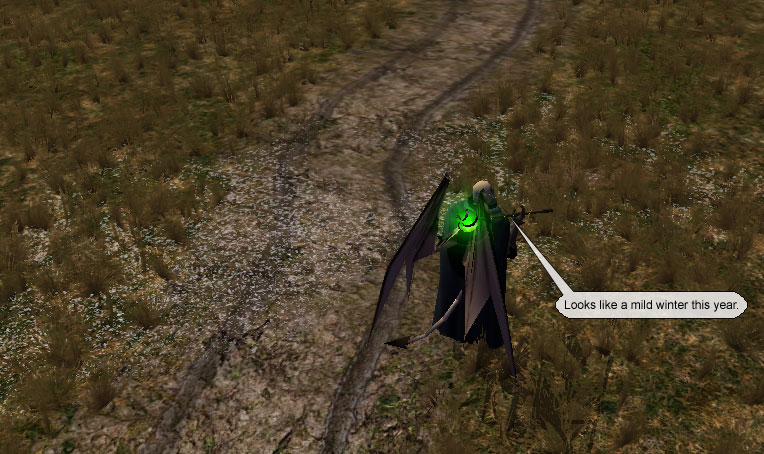 Is that a light smattering of snow? Looking good,

I'm doing some thinking about the question as well ... but between you and daveyeisley, you covered everything that I initially thought of ...

Eric of Atrophy wrote:Is that a light smattering of snow?  Looking good,

I'm doing some thinking about the question as well ... but between you and daveyeisley, you covered everything that I initially thought of ...

Yup, just a dusting of snow. Too much and it really shows off the limitations of the game engine (making the grass really stand out as little 2-D clumps) and shows just how little ground is actually being covered by the snow (because it would take many dozens of spots to cover all the ground, and that's just a lot for the game engine to handle).

snow for the winter, mud for the spring, leaves for the fall, dunno about summer ... 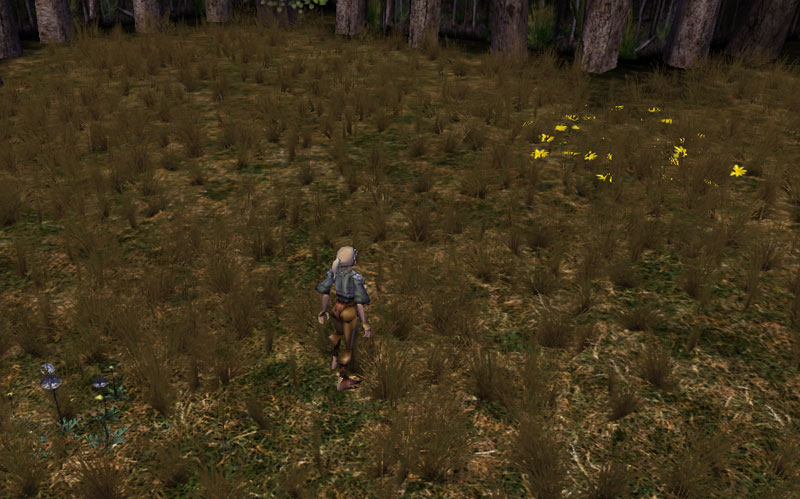 So far the Vale and the areas immediately outside of the village have the new system set up. Still trying to come up with a few more things to include so that there's more stuff that changes a little each season.

I am adding pumpkin patches to the system, so they'll only be available to harvest (via harvesting tool) during Autumn (because I like the idea of seasonal harvesting of different things). Plus, piles of pumpkins are something very visible. 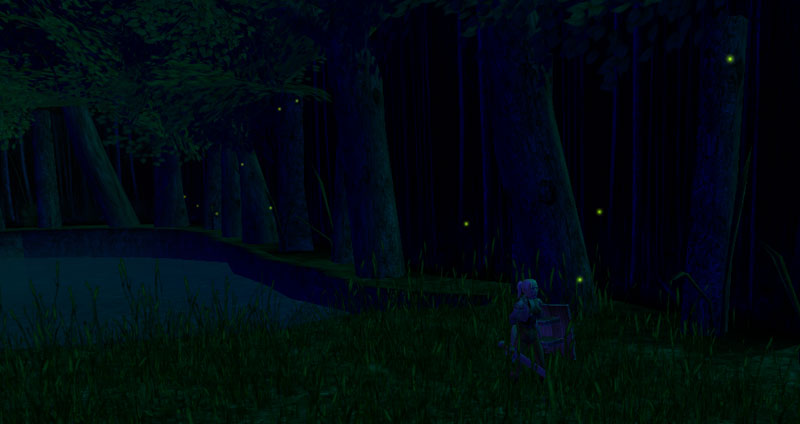 I'm really wracking my brain now to try to come up with any other little things for this. That way, if I need to make any more models for a hak update, I can get them in before I spread this sort of stuff to everywhere in the game.

Blowing leaves in autumn? Festivals and cookouts in summer....

Summer BBQ with more people gathered around the open firepit at night.... more "natural wildlife" in the fields
Fairy lights/festive stuff in the winter months... change the animal life around (more winter creatures, summer species head into hibernation)
Big piles of leaves in the fall... Change up the trees to leaveless models...

I'm in the midst of making blueprints for 20 muddy puddles and 20 watery ones that I made for this (and uploaded to the Vault if anyone wants to see before the impending hak update). I also busted out brand new models today for tomato plants, squash, cherry trees, apple trees, and mushrooms today, all for this thing.

Yes, some food gathering will end up being seasonal...but better looking.

Putting the system live today and working on spreading it outward from Valorian's Vale. For much of it to be visible to you in-game, you'll need the aeneahak_updates.hak file I just uploaded (it's about a 12 mb download).

Any chance as you go through that you might slightly adjust encounter rates to make spawns more likely? I recall numerous folks commenting about long treks with no activity/spawns making things feel empty....

Ah, that makes sense, cool. Hopefully it will go quick once you get a system worked out

New mushrooms made for this system: 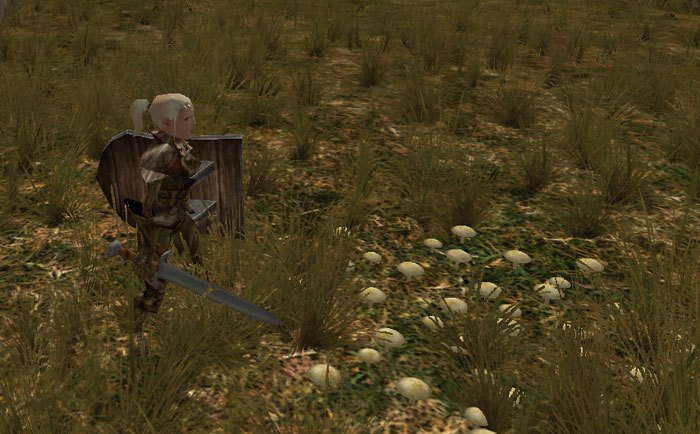 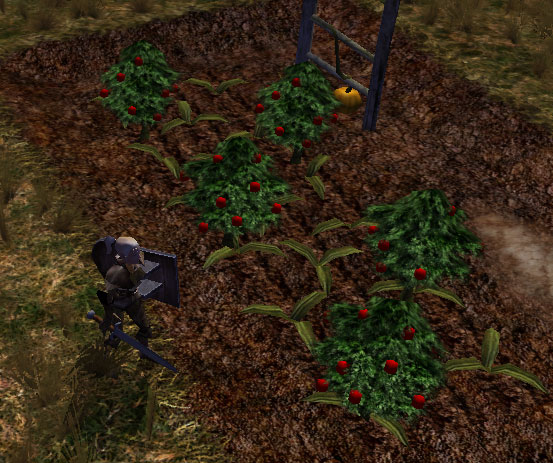 And mud puddles on the road in the rain: 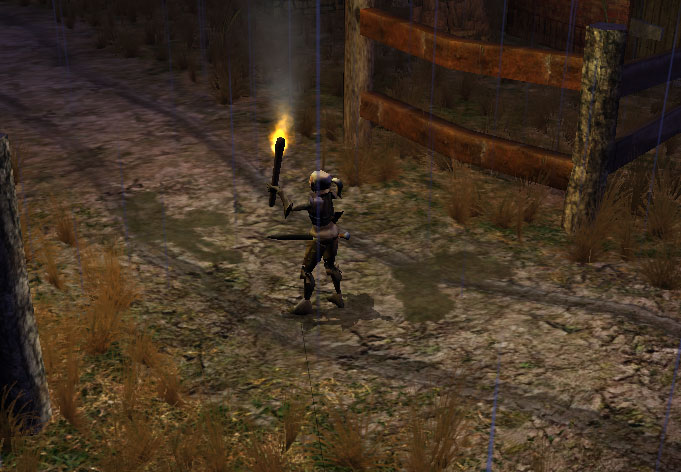 And brand new watery puddles when it rains: 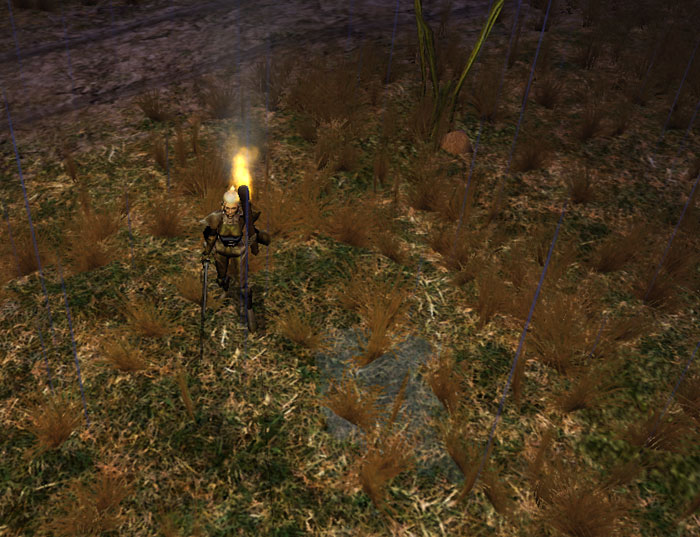 Also, as of now, I've added the waypoints and variables for this to almost all outdoor (and a few underground) areas.

Between the new waypoints I created, a few new placeable blueprints, and just adding those waypoints all over the game added 4 mb to the module file size.