For those wanting to get a head start on downloading large files...

Starting the 1st of the new year, I plan on starting to bring more elements of Project Q into Aenea. As I merge the files into the Aenea hak structure and module, the newer content will start appearing in-game. You can go ahead and download the version 1.5 haks anytime between now and the 1st (if you haven't already)...nothing about Aenea will change by having them installed until I start making changes to the module.

I've been working on adding the Q haks to the module the last couple of days. Still a work in progress.

So far I've busted out the appearance.2da file (for creatures) and I'm going through that line by line.

I've also pulled out the Q beholders and resized them all to better match the scale the old ones were...the Q ones are/were too big for the beholder tunnels tileset, and the little eyeball one was way too small. I also did a reskin already to add an "eye of the deep" beholder that's blue-green with a glowing central eye.

I might do a few other reskins since I need to update the Aenea haks for the merge anyway.

I'm also going to just throw in the reforged arrows and bullets that I have done, instead of waiting for more reforged work.

Lots of work to be done in the next couple of days.

Got the updated hak and tlk files ready to go, but the Vault is having a minor issue preventing me from uploading to their site. Should be able to get the files uploaded sometime today (the 1st).

Seems the staff at IGN had the day off, so the upload server issue didn't get fixed today. 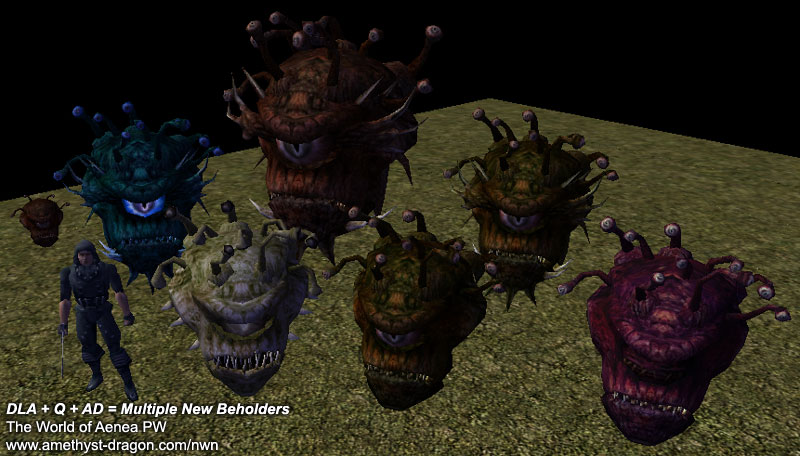 Great! Now I got this stuck in my head:

That white one looks like a great candidate for the Beholder Mage, I'm not sure why but that's what I thought of instantly when looking at it. Might have something to do with the "blind white eye" vibe it's giving across... more awesome work from

OK... cool.. I thought the purple one was "that person" that always manages to blink right when the "family photo" is taken.....

Wow, those are incredible...

Updated Aenea hak and tlk files now available on the Vault. I decided to revamp the cinder troll model (horns, flames, and a dim light emitter) and texture (removing most visible seams), and when I got done the Vault's upload server was back to functioning.

Edited to add the troll: 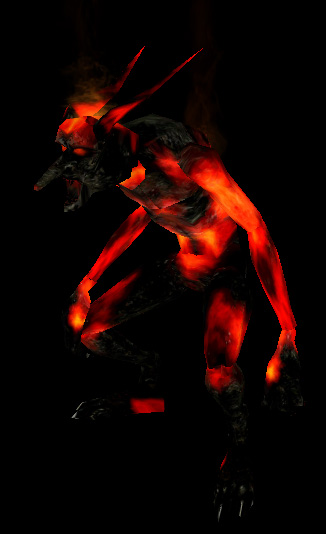 So, I took Raiden for a walk to see the beholders after the change and I must admit........WOW

So cool, although at least he still smashes them all

Today, I let my little ones play while the older two were at school, and I worked on integrating more Q content into Aenea...by extracting every shield model and icon that I wanted from the CEP and Aenea haks and doing a bunch of renaming/renumbering work, along with lots and lots of organizing, then renaming/renumbering some Q shields. Ends up being close to 10 MB of just icon and model files...texture files won't be changing, so those don't get counted.

The next hak update will be changing shields from a single-piece model to a three-part configuration, just like weapons. This won't result in any appearance changes for existing shields, except for default ones that get overridden by the improved Q basic shields.

I'm not really using these as "3-part" shields, where multiple parts get put together to make a shield. Instead, I'm adding a "blank" model for each level (bottom, middle, and top), and using the mechanics to almost triple the number of shield appearances that can be added to the game before it runs out of space. The "middle" and "top" levels are currently empty, and will remain that way until I hit the limit on "bottom" level appearances.

I also had to make myself a few handy images to act as guides when building in the toolset. This sort of thing works much faster than picking parts and colors and seeing how it looks. Here's the one for large shields, for those that think about such things...link. The dark grey and all black spaces are basically open for me to add newshields without breaking into the extra almost 500 spaces the restructuring opens. And yes, I purposefully did not include many of the older CEP shields, because newer stuff looks so much better and the CEP styles I didn't care for I hardly used anyway.

Nice !! ... And that picture will help anyone that wants to create a custom shield but can't find the appearance they want.... awesome work as always from

RustyDios wrote:Nice !! ... And that picture will help anyone that wants to create a custom shield but can't find the appearance they want.... awesome work as always from