I was playing along the other day, and something kept bothering me.  I finally figured out what it was...here's a guy that's almost as dumb as a rock, yet he's wielding a greatsword with the skill of someone that was trained well.  And he's wearing a chain shirt, which should be beyond his capability to properly maintain.

I've decided I'm going to get him a set of hide armor (pretty much the only logical choice for someone of his mental caliber).  On the weapon, however, nothing should fit except a club.  And he's too big and strong to use a basic club.

So today I created a new weapon type: the greatclub.  It looks like a thick branch ripped off a tree, and will make the perfect weapon for this guy and (with some bone or rusted spikes/knobs) for countless ogres and giants.

This will get added to the game with the next hak update.  Yes, we just had one three days ago, so it'll likely be a couple weeks at least until I add this one (and anything else I think of for a hak update).

Here's a preview for y'all: 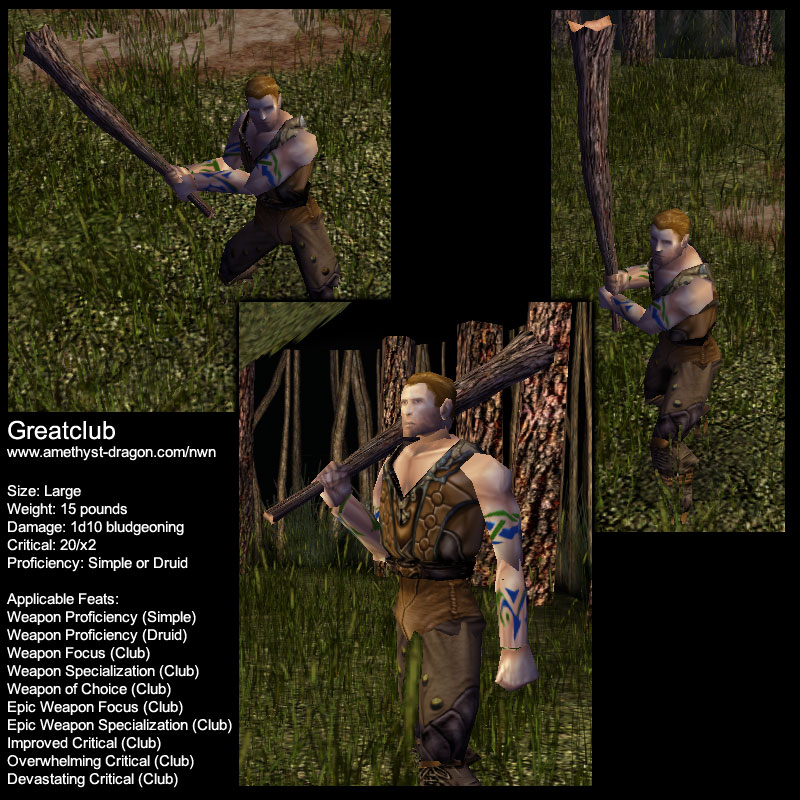 Looks like something MJ's Alex should pick up too (to match his tuna fish)....
Might even make this a weapon of choice for my monk/druid... just seems to "fit" with the humble/nature will provide theme as well..... ...

! This is proof-positive of why I don't play anything else - too much goodness to ignore!

This is totally the most perfect just-rip-it-off-the-tree club for a primitive!

Number of posts : 1045
Age : 61
Location : Earth, Sol system, in the Mutter's Spiral galaxy
Main Character : Ramana Domefarar -
Publicly a Ranger, privately an Opportunist.
Lay Follower of Jewel,
Sensate and practitioner of the Way of Pleasure.
Other Character : Ranara Duauth -
A being created by shadow and water, a wizard.
Is actually another persona of Ramana.
Other Character. : Dae, the panther,
companion to both Ramana and Ranara,
and the best real eye-witness to the
strange circumstance of those alternating personae.
Other Character.. : The Personae of Ramana Jala
NWN Username : Ramana Jala
Time Zone : US Eastern Time
Registration date : 2011-08-29

This, coupled with the new totems, makes me want to try out a class which has never really interested me much: the Barbarian! *.*